Molecules are many-body systems. The correlation between their constituents is decisive and their spatial and momentum distributions are interdependent. While the geometrical structure, the electron density, or electron orbitals can be visualized nowadays, these correlations have escaped direct observation so far.

In this work, we implement a new imaging scheme to observe electronic correlations. It combines high energy photoelectron emission with coincident detection of the reaction fragments. One of the electrons of a hydrogen molecule is mapped onto a detector, whereas the quantum state of the second electron is determined by detection of the ionic fragments. Quantum mechanically, this is equivalent to projecting the initial two-electron wave function onto products of different H2+ (bound) molecular orbitals (B) and a plane wave (A). In doing so, one can thus determine if and how the density distribution of one electron changes upon changing the region of phase space in which one detects the other, correlated, electron. 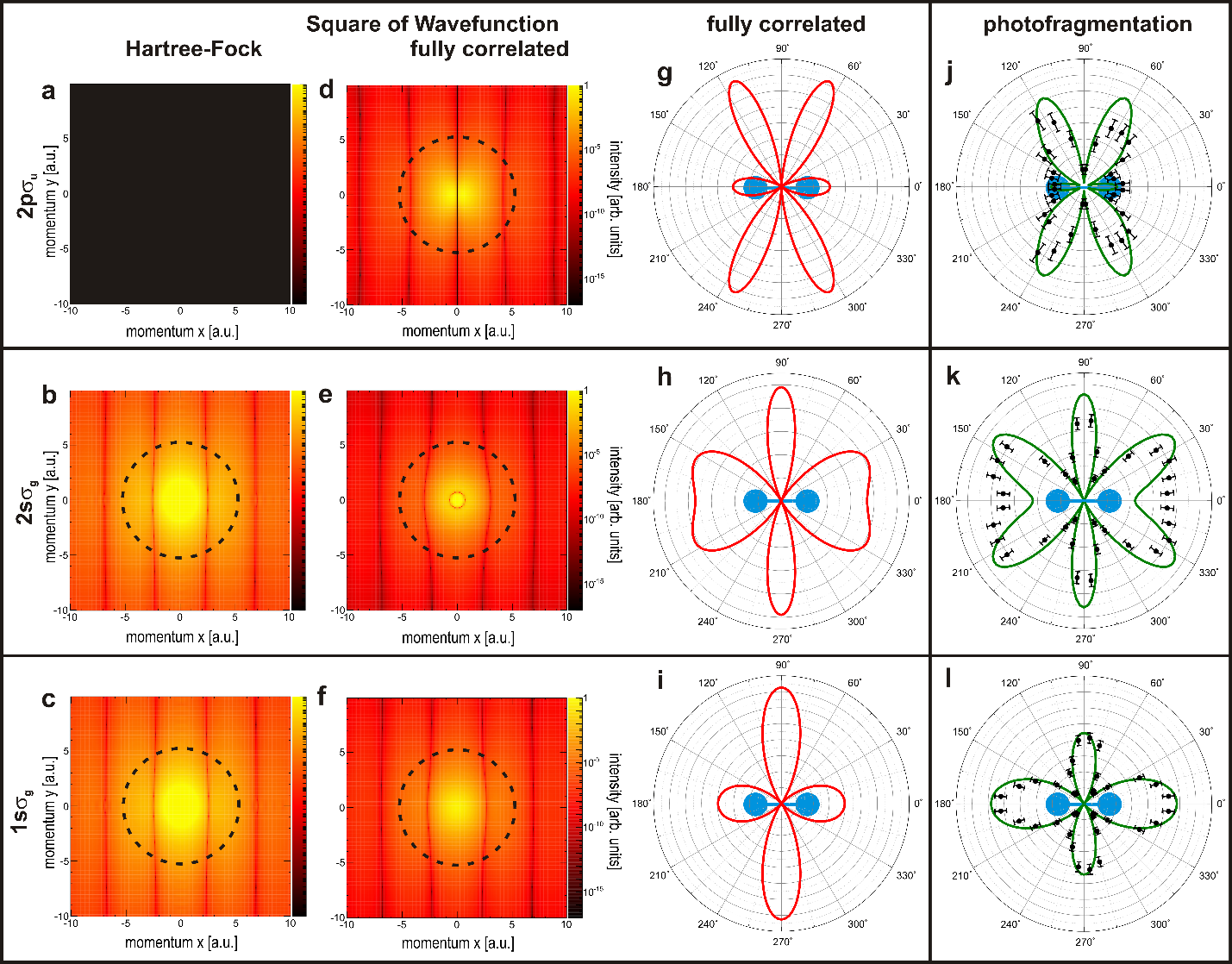 Figure 1: Correlation imaging of the H2 two-electron wave function. a – f Momentum distributions of the ejected electron A resulting from the projection of the two-electron wave function of H2 onto different H2+ states of the bound electron B; a - c uncorrelated Hartree-Fock wave function; d - f fully correlated wave function. The different quantum states of electron B are 2pσu (a, d), 2sσg (b, e), and 1sσg (c, f). Circular lines show |k| = 5.3 a.u. (c, d, f) and |k| = 5.2 a.u. (b, e) which correspond to ionization by a photon of 400 eV energy. g – i ground state wave function (intensity distributions along the circular lines shown in (d - f)). j – l Experimental and theoretical MFPADs (symbols and green line, respectively) obtained after photoionization with circularly polarized photons of an energy of 400 eV for the same final states of electron B measured in coincidence. Ions and electrons are selected to be in the plane of polarization of the ionizing photon and data for left and right circularly polarized light are added. Molecular orientation as indicated. The error bars indicate the standard deviation of the mean value

In the corresponding publication, we present the approach in greater detail and discuss our results (see below). The outcome of the experiment proofs that high energy photoelectrons are a powerful tool for molecular imaging. It may pave the way for future time resolved correlation imaging at FELs and laser based X-ray sources.