Observation of Photoion Backward Emission in Photoionization of He and N2

Originally discovered by A. Einstein in 1905, the photoeffect has since become a powerful tool to explore structure and dynamics of matter and it is indespensable in modern technology. Surprisingly, even in its simplest manifestation – absorption of a single photon and subsequent emission of one electron from a single atom or molecule – the photoeffect itself is still the subject of ongoing research. In a recent work, we have comprehensively adressed the role of the photon momentum in photoionization of He and N2. We have experimentally confirmed a 90-year-old prediction of backward-directed ions created by interaction with light that exerts a forward-directed radiation pressure (Fig. 1). Our fully-differential experimental data on He and N2 one-photon ionization in an energy range of 300 eV–40 keV demonstrates how this surprising effect manifest: The photon momentum is imparted onto the photoion which is essentially the system's center of mass (Fig. 2). Moreover, the photon momentum brings in additional orbital angular momentum that leads to a forward tilt of the electron angular distribution (Fig. 3). The resulting forward-directed mean momentum of the electron is balanced by a backward-directed momentum transfer to the ion which overcompensates the forward-directed photon momentum transfer. 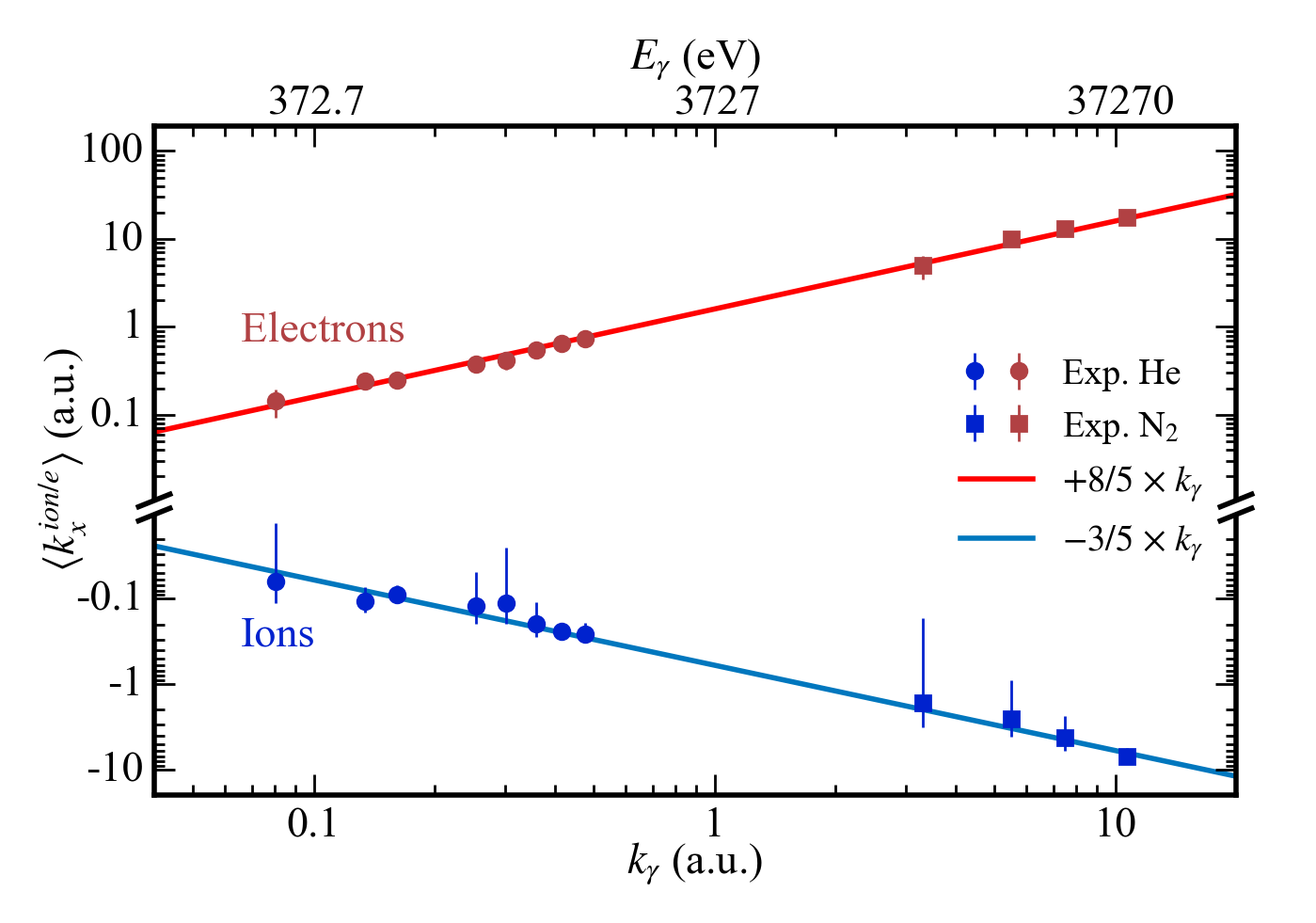 FIG. 1: Mean value of electron (red) and ion (blue) momenta along the light propagation axis after one-photon ionization. Horizontal axis: Photon momentum kγ (bottom scale) and photon energy Eγ (top scale). Circles: He photoionization (circularly polarized light); squares: N2 K-shell photoionization followed by Auger decay, where the mean value corresponds to the sum of both N+ fragments adjusted for the Auger electron (linearly polarized light). The lines show the prediction from Phys. Rev. Lett. 113 263005 (2014). Note that in order to compare the He and the N2 datasets, the ionization potential was approximated as zero in this figure. The error bars are asymmetric only because the y-axis is logarithmic. 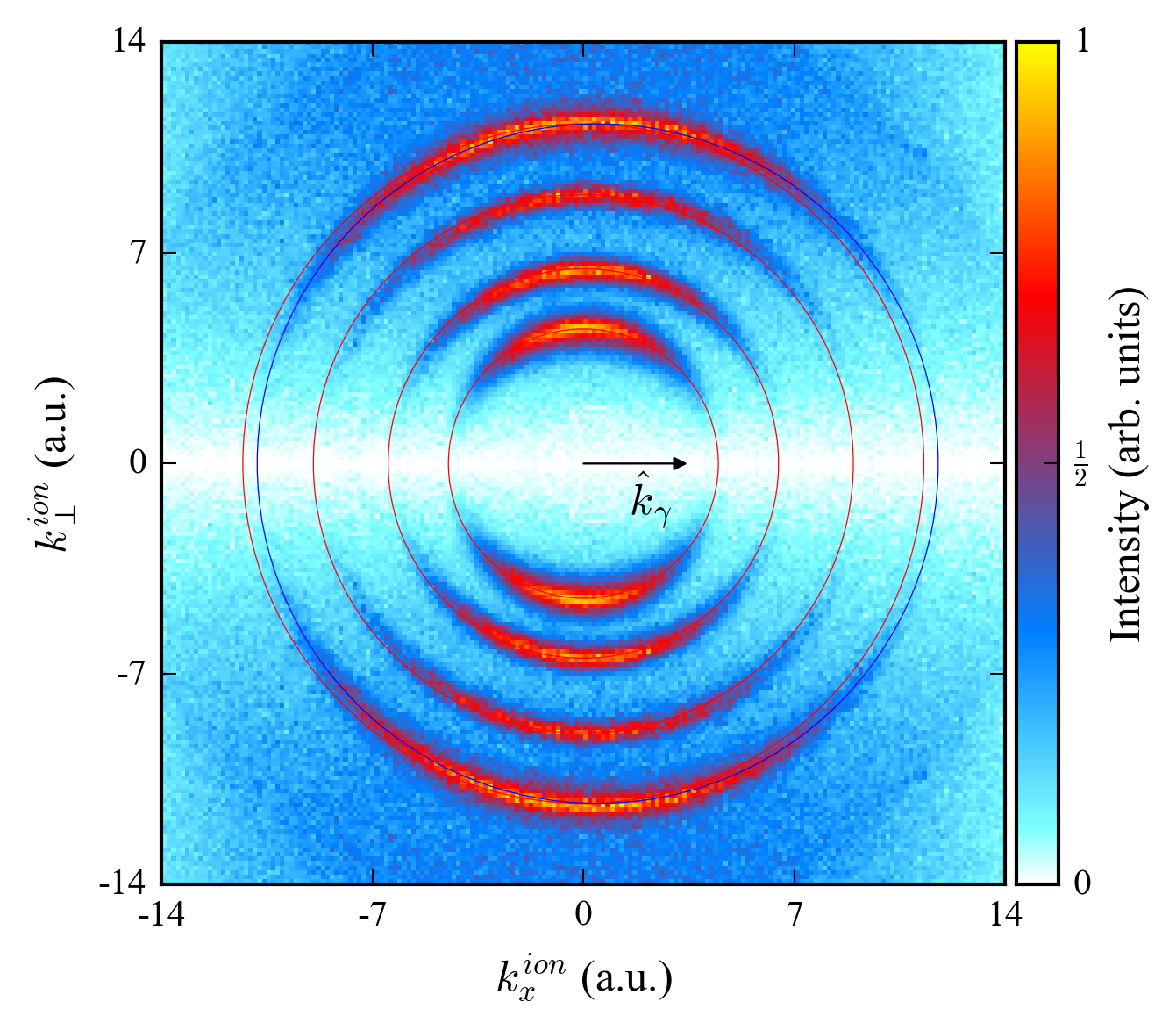 FIG. 2: Momentum distribution of He+ ions from single ionization by circularly polarized photons with photon energies of 300, 600, 1125, and 1775 eV (from inner to outer ring). Horizontal axis: momentum component parallel to light propagation axis. Vertical axis: momentum perpendicular to the light propagation. The lower half is a mirror image of the upper half of the figure. The red circles are centered at the origin with a radius of the electron momentum. The blue outer circle is forward-shifted by the corresponding photon momentum kγ = 0.476 a.u. The data from the different photon energies are arbitrarily normalized to match the color scale. 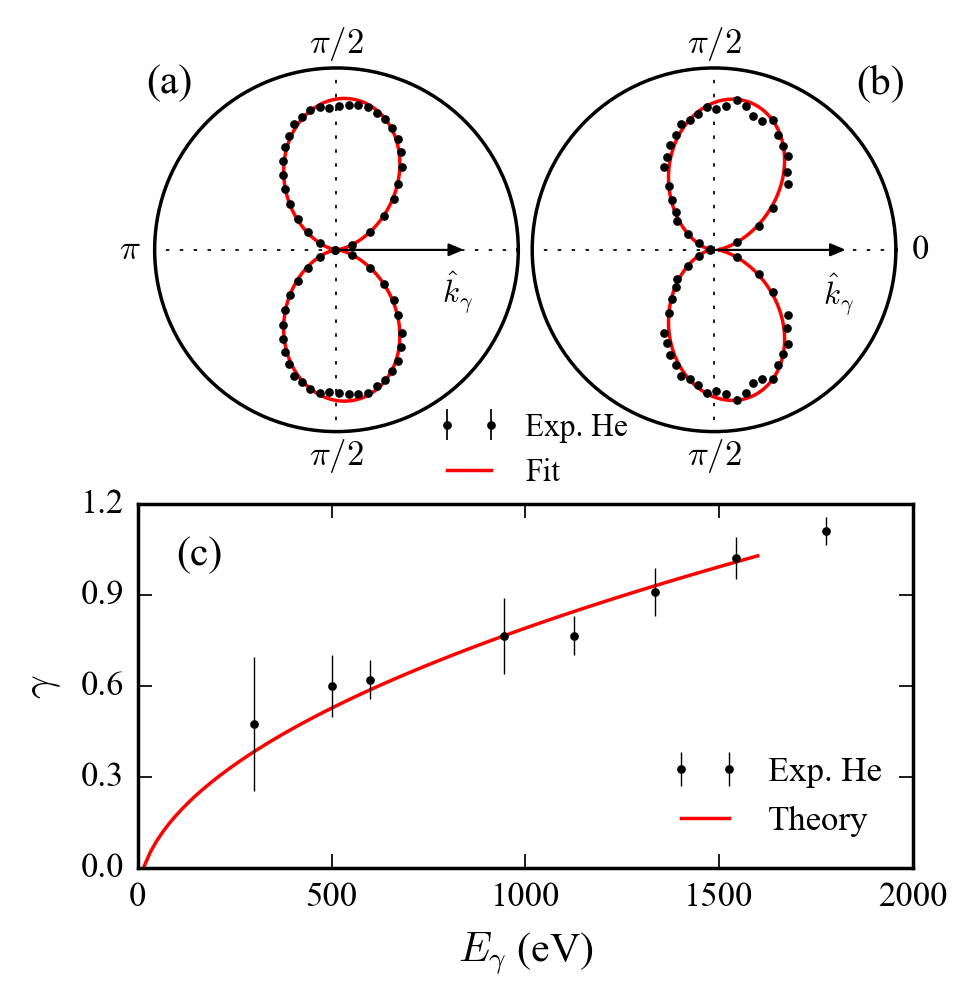 See online:
Find the publication in Physical Review Letters.
Read a synopsis in Physics Magazine.
Read for free on arXiv.